So, there has been a few things going on…

And at the following links you can read/ see all about it:)

Uncle LaP has been kind enough to give us a page of our own at the slartist homepage some of the new involvments and also some of my old ones:

And Saffia, Rik and Aisling visited us for an interview for the seasons last show for Prim Perfect TV talking about The Night Theater, our current collaboration show Imagine with Extravadanza and Elysium, and SL dance in general:

Designing Worlds gets to Imagine a World of Dance!

Late, late, I am terribly late…

Now that the last show of Imagine has been performed I want to share this wonderful film Tray Portos (Tim Ray​ on facebook) made of it with everybody.

It has been an amazing amount of work and inspirations from when I first looked at the wonderful build by Jamie of DRD at the Fantasy Faire this year together with Royal, strolling along the neighbouring sims one late night/ early morning after one of our shows there till last nights last performance. That he would go win the big RFL auction of it (???!!!!) making this show possible to start with was the sort of thing that deserves respect and the dedications from those around to make his vision come to life. So of course I had to roll up my sleeves, put a few principles aside, and put my all into helping him make it happen.

Of all the people I have worked with creating shows, I must say Royal and I are the best functioning team so far. We share the same kind of madness, if there is an idea, nothing is impossible. It just takes some doing. A lot of hard work and some pixiedust sprinkled ontop.

So what do you do when you have a whole fairytale land to build? A whole show to make? You contact your friends and you she who wants to come along on the ride of course! And for this show we ended up with Diiar, BabyPea, Lulu and SexyS jumping in the boat to choreograph a few acts along with us. Diiar doing the Little Mermaid and Pocahontas, BabyPea choreographed Rapunsel and the Jungle Book, Lulu as Tinkerbell and SexyS the finale at the big pink castle; Cinderella. It was amazing to see the work these ladies have done, how they have used the beautiful sets Royal built for them and how they have brought them to life. A very magical experience for everybody to share as a result.

Once we knew who was going to join us, and what fairytales they wanted to bring to life, then we set out to plan the sims layout. We had allready planned on some sort of ride for the audience, to bring them around to each little story, but what would it be? A golden ship? A magic carpet? A train of the kind you take at funparks  for tours? After playing with some ideas and testing the trainsystem on the sim, Royal created the magic carpet, which was my favorite, I have always loved the ideas of flying carpets, and it really seems the most logical and functional for this show as it is both airborn for Aladdin and the Icequeen and dives into the depths of the sea for the Little Mermaid. After playing around a bit, testing different buildings in different locations, wanting the Cinderella castle with its grandeur and the connecting town square to be some sort of center, we tried to make a sort of flow between the different sets. Trying to consider who was doing what, making sure there werent too many back to back performances for the dancers to allow for smooth costume changing when needed and also to tie together the sets so they would float into a whole, no clashes between the underwater world of the Little Mermaid and Snowhites forest cottage or between the jungles of the Jungle book monkey temple and its surrouning sets of Sleeping Beautys fairy guardians forest cottage and the magical land of Neverneverland for Peter Pan and Tink. That is also why Aladdin and Frozen ended up in the sky, we simply couldnt let the frost or the sands of the desert destroy the otherwise lush landscape of the rest of the sim;) ( And it made a hell of a rollercoaster ride going up and down).

Royal has worked hard on this show, day and night, making the vision come to life. For a change, I have stepped aside, let him take the lead, and tried to fill in the blanks where needed. Like landskaping inbetween sets that he built, so he could focus on building them, make sure his skills in building were put to the right use for the technically difficult parts like the carpet ride, and the smaller tasks of making hair for Rapunsel to climb. So I did my two sets, Sleeping Beauty and Snowhite, and then tried to fill in the blanks, like putting walkable paths in and landskaping inbetween the different areas so they would melt together where parts were missing, putting flowers around the Jungle Ruins that he built and so on, without messing up the vision he had for the show, just trying to enhance it and take a little of the load off for him. I think the end result is just what we hoped for. And judging from the happy dancers and audience, it feels we succeeded.

For a change, my acts for this show are a bit simpler than I tend to go. The songs are fairly short, and the music out of the Disney versions of these stories demanded some sort of theatrical attributes, a bit of humour for Snowhite, a bit of magic for Sleeping beauty and the Snowqueen. I was a bit hesitant to doing the Let it go song. I love it yes, but it has been a bit overplayed, overdone,, over hyped. But I am glad Royal insisted I would. And that Icecastle and all the snow really does suit part of me very well. And after all, it is one of my little girls favorite Disney movies. So, that one is for her and Royal. The ice princesses,,, hehehe.

The particles I have mostly used for this show come from ColeMaries collection at Coles Corner:

and Setunas brand of particles Exia:

If you havent explored these ladies magical creations, it is well worth a trip to both their stores, I promise.

I was also very happy to put Sarah in the lead as Snowhite. At the time, I had no idea she has collected Snowhite figures, that it was one of her favorite princesses, another bonus happy smile for this show. And that is very much what it has been about. It is a show for putting smiles on peoples faces. Bring out the child in them. Wake memories and that magic childhood spirit. So maby we will meet again, do an encore sometime? We will see. Many pots brewing, bubbling over. What I do know is that the sim will be open atleast till the end of the month. And there are pictures all over flickr, and videos, and a few blogs to indulge in till next adventure unfolds. So enjoy! And see you again soon.

More to be added as I go along 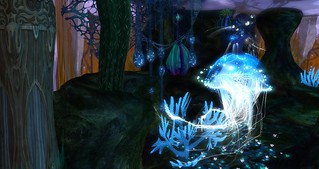 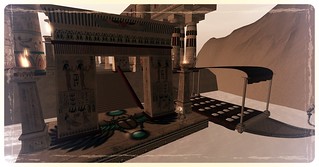